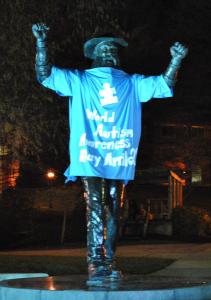 The mission of Autism Speaks U is to promote autism awareness within the local community and act as an advocate for people with autism. Autism Speaks U also aims to engage members in fundraising events for autism research.

There are over 50 official Autism Speaks U chapters nationwide. Since its inaugural event at Penn State in 2006, Autism Speaks U events have raised over $1 million and student-organized Walk teams have brought in millions more. The Appalachian State University chapter aims to add to this legacy.